NO RESPECT FOR THE DEAD

The Burial for the Democrat Representative John Lewis was turned into a political campaign last week when the formal President Barack Obama took the stage to attack President Trump's policies, criticized the voting right,  inequality in America, and filibuster which he previously supported when he was a Senator and as President.

Obama further took it to the next level of outright face out lies, slander, and deceit with false claims that the mob and anarchists rioting, looting, killing, and destruction going on in the inner cities of America for continuous eight weeks now has been peaceful, at the same time criticizes President Trump for sending in the federal troops to control the lawlessness and unrest in Portland, Seattle, Chicago, and other cities that have witnessed havoc, anarchy, high crimes, killings, and destruction of private, state and federal properties.
Obama also falsely claimed that Black minorities and students are denied the opportunity to vote in an election because of the requirement for identification.  Perhaps if Obama needs to make a political speech that is full of false information, a funeral is not the best place for that, but the Democrats and the Never-Trumpers, as usual, are so predictable and will never let any crises or any event go away without politizing it.  They did the same thing at the late John McCain funeral.
From the naturistic and spiritual point of view, a funeral is a place to honor and respect the dead. Keep politics outside the door; respect the dead at a funeral because the dead person's spirit needs to rest in peace, not in pieces. There is plenty of time outside the funeral to discuss our differences.
It is hyper hypocritical to speak about inequality in America while at the same time demanding to be treated differently because of race and skin color.  Every citizen should be held at the same standard, and that is what the constitution represents.
The truth is that we are in the year 2020,  and no one who qualifies to vote in an election is denied the right to vote because of skin color. In fact, it will be better to protect the legal votes of millions of America by requiring a "Federal Voting Identification", which the Democrats refuse to accept because Voter ID will reduce election fraud and illegal votings that have been evidenced to benefit the Democrat party ninety-nine percent of the time.  It is fair to argue that if we need proof of identity to enter federal or state-buildings, shop, enter a bar, get a loan at the bank, enter the Airport, it is fair to mandate a  Federal Voting Identification to protect the integrity of the election, the only power that "We the People" have.
Is Obama trying to tell the world that Black people are too stupid and incapable of getting a free issued personal identification card? 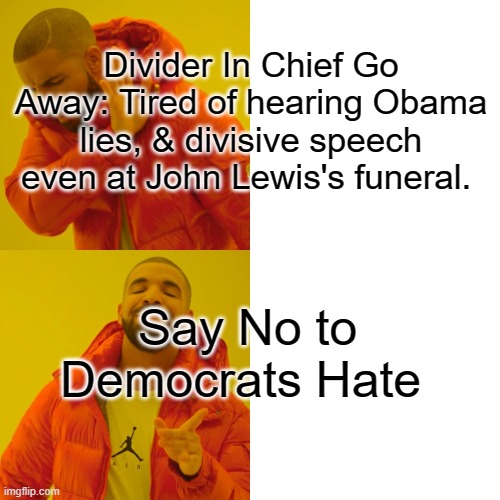