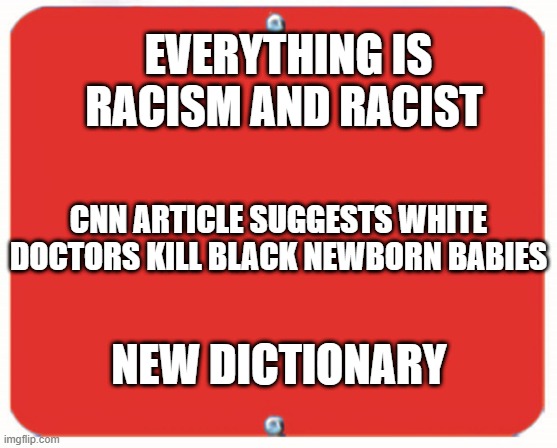 Everything Is About Racism and Racist

- A New World
- New Words
- New Meanings
- New Dictionary
My dear friends,
Buckle up, this is the new world we are living in today.  Who would have thought that our world would change so fast to the extent that everything that was considered normal and good is now regarded as evil, racist, and symbols of oppression by the radical progressive socialist leftists, the "woke" community, and mainstream media? Nobody in the right sense of mind would imagine that this will be going on today in our culture.  They call it a cultural revolution or social justice, either one does not make any real sense.
Yes, such is the world we live in today. It is like a twilight zone, where one suddenly wakes with that panic face and heart racing, rubs the eyes hard to re-confirm he/she is truly awake.
In the Liberal progressive socialist new world, the definition of racist has changed to conform to liberal wishes and demands.   The word racist has become a caricature whenever is used in mainstream media because racism has been weaponized as a political weapon by the radical Liberal Democrats and their friends in the Mainstream Media that quickly categorizes anything they do not agree with or approve as racist.
Now everything in our lives is scrutinized through the back of a lens, with outright lies in our faces, and no feeling of guilt and shame from the constantly lying media and their friends.  In this new world, to call a spade, a spade is now regarded as racist behavior, or even identifying a black color as "black" or white color as "white" is regarded as racists.   In the Liberal progressive socialist world and according to liberal's new definitions of racism, the following people who belong in any of these groups are racist:
- Being White is racist
- White men are racist
- Christians  are racist
- Republicans are racist (Men, women, Blacks, Asians & Hispanic)
- Americans are racist
- God is racist
- Jesus is racist
- Mother Mary is racist
- American Founding Fathers are racist
- Children who attend Private or Charter schools are racists
I cannot imagine that not even God, Jesus, and Mary could not escape the anger of the "woke community".
Recently CNN wrote an article with the worst insane headline I have ever seen in my lifetime "Black newborn babies in the US are likely to survive childbirth if they are cared for by Black doctors, but three times more likely to die when looked after by white doctors" ~ CNN
So CNN suggests that white doctors now kill Black newborn babies, this is reckless and insane.  CNN and the Mainstream Media are relentlessly dividing the country, instigating racial divisions, then turn around and use their platform to blame the division, chaos, anger, and destruction going on in the American inner cities on Trump Supporters and the American people.  No wonder majority of the American people do not trust the media.
See CNN Article with the link below.
https://www.cnn.com/2020/08/18/health/black-babies-mortality-rate-doctors-study-wellness-scli-intl/index.html?utm_term=link&utm_medium=social&utm_content=2020-08-18T17%3A40%3A08&utm_source=twCNN
The woke communities also took it further to the next level and label the following behaviors as signs of racism:
- Living in a good home and a safe neighborhood.
- Driving a particular kind of car not approved by the leftist "woke" community.
- Advocating for personal responsibilities and being independent is racist.
- Voted or will vote for President Trump in the oncoming election is racist.
- Supports Police or other law enforcement agencies like Immigration and Customs Enforcement is racist.
- Advocating for Pro-life and the Second Amendment rights is racist.
- Advocating for Nuclear Family is racist.
You may think this is ending but not yet, as the "Woke community" takes it further to suggest that certain food, food brands, and packaging are racist:
- Uncle Bens Rice
- Black Beans
- Aunt Jemima Brand
- Brown Rice
- White Rice
And a whole lot of others I cannot list here due to space.
Consequently, before the end of the year, 2020 more food items will disappear from the shelf or rebranded to please the "Woke" movement.
The mainstream media and the liberal left of the Democrat party have gone rogue, they have destroyed our institutions and indoctrinate the young generation to believe in hatred, violently attacks people that disagree with their agenda, acting as racist they claim to be fighting against.   This Insanity is not ending soon!
Leave a comment to add other behaviors, places, or things that are deemed racist by the "Woke" community, or just let me know what you think.
Culture Family Politics Religion Conflicts Social

Please be polite and respectful to each other, we allow free speech, but we want people to enjoy their stay here and interact with each other in a healthy respectful manner.

Abusive comments will be removed.